Danish researchers have shown how gut bacteria, which are promoted by breastfeeding, may benefit the immune system in infants.

It is widely acknowledged that breastfeeding benefits the health of infants. However, there is still a lack of solid evidence to document what happens in the gut of breastfed babies and how gut microbes may contribute to these beneficial effects,

It has long been known that certain gut bacteria—bifidobacteria—are prevalent in the gut of breastfed infants. Although these bifidobacteria are considered beneficial, the reason why has so far been unclear.

A new study has shown that the types of bifidobacteria, which utilize components of breastmilk to grow in the gut of infants, contain a particular enzyme. This enzyme enables the bacteria to produce small molecules that are believed to have a beneficial effect on the immune system.

Researchers from the National Food Institute, Technical University of Denmark, and the Department of Nutrition, Exercise and Sports at the University of Copenhagen led the study, which has been published in Nature Microbiology.

The idea for the project arose five years ago, when the driving forces behind the project, Martin Frederik Laursen and Henrik Munch Roager, made a discovery by coincidence while they were colleagues in the Research Group for Gut, Microbes and Health at the National Food Institute.

The discovery piqued their curiosity to such an extent that they launched the project, which has been completed with a very small budget, a strong drive and persistence, and—importantly—support from within the research group.

”It all started on a Winter morning five years ago when we stumbled upon the fact that infant stool samples contained remarkably high levels of a certain molecule. And now we know that this particular molecule could be key in our understanding of how bifidobacteria help strengthening breastfed children’s immune system,” says Henrik Munch Roager, who was the principal investigator on the study and is now Associate Professor at the Department of Nutrition, Exercise and Sports at the University of Copenhagen.

The researchers’ focus has been to understand the reason why such high concentrations of these substances—the so-called aromatic lactic acids—are present in breastfed infants’ faeces, and how they potentially could affect the health of infants.

”Experiments in the lab have shown us that the aromatic lactic acids, which the bifidobacteria produce in the gut, can affect the activity of immune cells in what we would consider to be a beneficial direction in relation to a well-balanced immune response. This could prove relevant when for example the infant’s immune system is an infection,” senior researcher Martin Frederik Laursen from the National Food Institute explains.

The study design did not allow the researcher to look at the incidence of disease among the infants who participated. Therefore, a natural follow-up study would look at the connections between the aromatic lactic acids, the development of the immune system early in life and their role in preventing disease.

”More studies are needed to be able to prove whether the immune effects observed in the laboratory, also apply to infants and to what extent these effects provide protection against infections and immune-related diseases later in life,” says Martin Frederik Laursen and adds:

”Furthermore, we do not know if there is a window where this effect of breastfeeding is particularly important in order to achieve the optimal effect on the immune system. Naturally, it is interesting and relevant to investigate this further.”

The researchers hope that down the line, the results of the study can pave the way for new, targeted ways of strengthening children’s immune systems in early life.

”The results of the study are useful for supporting measures aimed at helping children develop a balanced gut microbiota, which supports a well-functioning immune system. Such measures include supporting breastfeeding and developing new types of infant formula and probiotics that promote the presence of these bifidobacteria in life early,” says Henrik Munch Roager.

The study is described in further detail in a scientific article in the journal Nature Microbiology: Bifidobacterium species associated with breastfeeding produce aromatic lactic acids in the infant gut.

The study includes data from 59 children who participated in the SKOT cohort study of young children’s diet and well-being from the Department of Nutrition, Exercise and Sports at the University of Copenhagen, and data from stool samples collected from the CIG cohort of 25 infants during their first six months of life.

The National Food Institute’s Research Group for Gut Microbes and Health studies the effects of diet and dietary components on the microbial population of the gut and derived effects on host health. Read more about the group’s research on the institute’s website.

The Department of Nutrition, Exercise and Sports at the University of Copenhagen also conducts research into the effects of gut microbiota on food digestion and health. Find out more on the institute’s website. 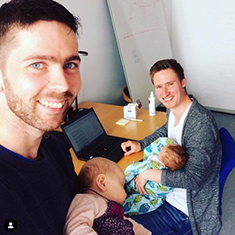 During the course of the study, Henrik Munch Roager (left) and Martin Frederik Laursen both became dads (again).