Team sport effectively counteracts diminished vascular function in women with high blood pressure, even several years after the onset of menopause. This, according to new research from the Copenhagen Center for Team Sports and Health at Department of Nutrition, Exercise and Sports, University of Copenhagen. 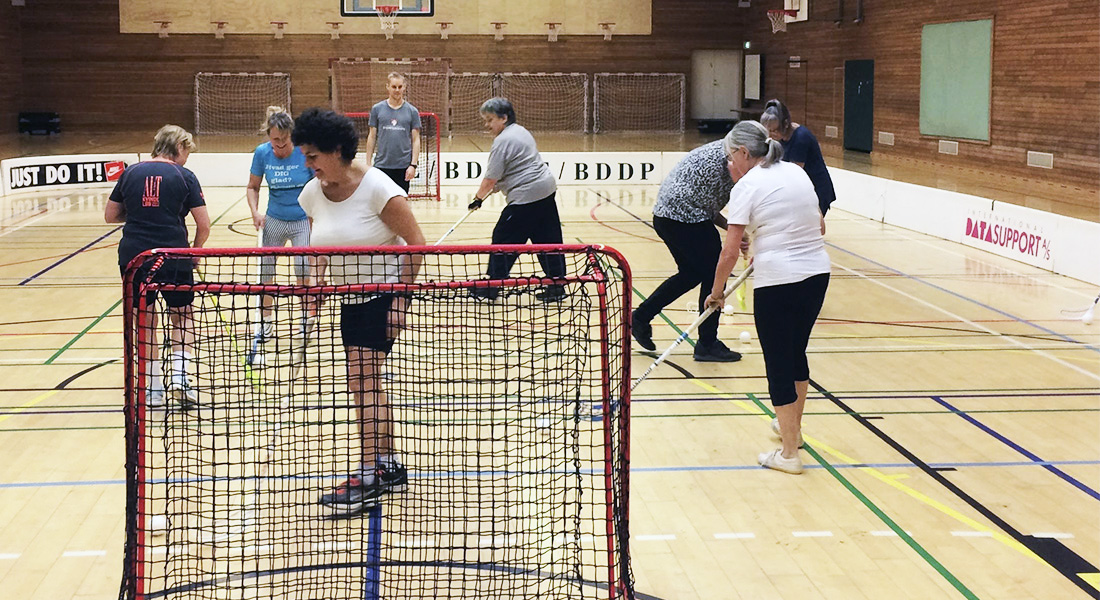 Estrogen loss associated with transition into menopause increases women’s risk of developing cardiovascular disease and reduces their ability to benefit from training. However, a new study from the Center for Team Sports and Health at the Department of Nutrition, Exercise and Sports, University of Copenhagen demonstrates that postmenopausal women do  benefit from playing small-sided floorball twice a week.

Effect of ten weeks of floorball

In the study, a group of postmenopausal women with high blood pressure and a control group with normal blood pressure participated in bi-weekly floorball training for ten weeks.

For the women with high blood pressure, floorball training reduced vascular stiffness and lead to a decrease in blood pressure by 15 (systolic) and 9 (diastolic) mmHg in the hypertensive women. This is significant and corresponds to a 40% lower risk of death by heart attack and a 30% reduction for coronary artery disease, which is characterized by reduced oxygen supply to the heart.

The group of women with normal blood pressure had slightly elevated blood pressure at the onset of the study, which is common among inactive postmenopausal women. They too experienced a noteworthy 10 mmHg decrease in systolic blood pressure with the floorball training.

Associate Professor Thomas P. Gunnarsson of the Department of Nutrition, Exercise and Sports is enthused that just two workouts a week resulted in such a pronounced effect on women's health:

"The study demonstrates that team sport among postmenopausal women is such an effective form of exercise that, with only two workouts a week, there are significant improvements in blood pressure, vascular function and body composition."

Reduction of the dangerous fat

One of the study’s other interesting outcomes was also that the postmenopausal women experienced a noteworthy 10% reduction of visceral fat mass (the 'dangerous' fat found between internal organs). Furthermore, total fat mass decreased by half-a-kilogram.

According to Professor Jens Bangsbo, head of the Copenhagen Center for Team Sports and Health, it is especially noteworthy that these results emerge from a group of women with no prior experience with floorball:

"The study supports the numerous health benefits from team sports participation and provides us with a deeper understanding of training adaptations associated with team sport, which creates high motivation among postmenopausal women. Furthermore, the lack of experience with floorball was not a limitation in the womens´ability to achieve excellent health results in a relatively short time.”

The results are promising especially as it has been believed that vascular smooth muscle in postmenopausal women cannot change with exercise. The study contradicts that notion.

The new findings contribute to an increasing body of knowledge about the mechanisms involved in high blood pressure among postmenopausal women, as well as the types of exercise that can effectively counteract the negative consequences of loss of estrogen with time in the postmenopausal state.