Children who move while learning sounds of letters significantly improve their ability to recognize individual letter sounds. This is the conclusion of a new study conducted by the University of Copenhagen’s Department of Nutrition, Exercise and Sports and Denmark’s National Centre for Reading, in collaboration with 10 Copenhagen area school classes. 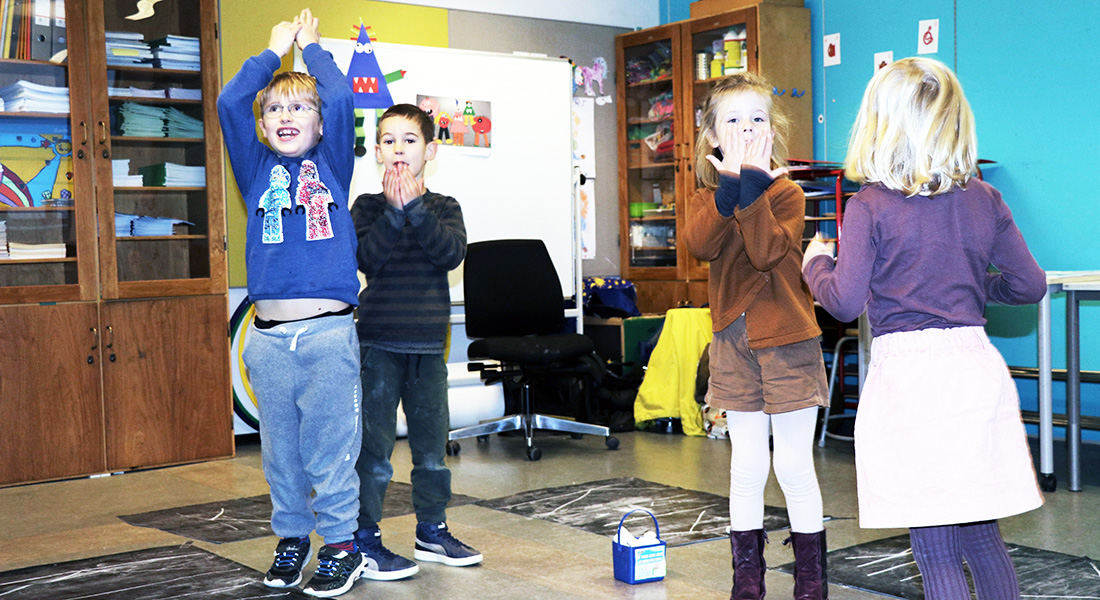 Reading is a complex and crucial skill that impacts the ability of youth to perform as students, across social contexts and in their eventual working lives. Therefore, it is important to develop reading skills during childhood.

Children get twice as good with difficult letter sounds

Now, a team of researchers from the University of Copenhagen and Denmark’s National Centre for Reading has focused on whether whole-body learning in instruction, known as embodied learning, has a positive impact on children’s ability to learn letter sounds.

"Our research demonstrated that children who used their whole body to shape the sounds of letters became twice as proficient at letter sounds that are more difficult to learn compared to those who received traditional instruction," says PhD student Linn Damsgaard of UCPH’s Department of Nutrition, Exercise and Sports.

The project included 149 children, 5 – 6 years old, who had just started school. They were divided into three groups: one that stood up and used their whole body to shape letter sounds; a seated group that shaped letter sounds with their hands and arms; and a control group that received traditional, seated instruction during which they wrote letters out by hand.

The study also demonstrated that students who shaped difficult letter sounds with hand movements while seated also had a greater increase in proficiency than the control group.

Associate Professor Jacob Wienecke of UCPH’s Department of Nutrition, Exercise and Sports led the study and explains the project’s background:

"The overarching goal is to learn more about which methods can be used to give beginner readers a good start. The idea is that if, through play and movement, we can reach children where they are and where their strengths truly lie – and we can create a form of learning that combines reading with play – then that's truly positive."

Previously, the researchers demonstrated that the children felt more motivated by teaching methods which incorporated physical movement. Associate Professor Jacob Wienecke hopes this will provide an opportunity to inspire teachers and school managers to prioritise movement across subjects.

The study also investigated whether a direct effect of embodied learning could be found through children's reading of individual words. This was not possible, which may be due, among other things, to the fact that the children were at such an early stage of their literacy development that they could not yet transfer their knowledge of letter sounds to reading words. Or, as PhD student Linn Damsgaard describes it: "Just because you learn the notes and sounds of a flute, doesn’t make you a master.

The study is the first in the world to examine the effect of linking whole-body movement to the learning of letters and their sounds. It is published in Educational Psychology Review as: Effects of Eight Weeks with Embodied Learning on 5-6 Years Old Danish Children's Pre-reading Skills and Word Reading Skills: The PLAYMORE Project, DK

The study is funded by the Independent Research Fund Denmark.