Farming crickets for human consumption is less of a burden on the environment than other livestock production systems according to a new study by the University of Copenhagen’s Department of Nutrition, Exercise and Sports and Department of Plant and Environmental Sciences. Results suggest that insect farming systems can be improved to become even more environmentally sustainable in the future.

Identifying areas of particular high impact is an important step to improving the environmental sustainability of production systems. Insects have been heralded as the foods of the future - and now the first study to measure the environmental impacts and identify hotspots associated with commercial insect production has been published.

The study demonstrated that cricket farming can be a sustainable means of producing animal source foods. The study compared cricket production in Thailand to broiler chicken production. Fifteen different environmental impacts were investigated including global warming potential, resource depletion and eutrophication. In most cases, cricket production had a lower impact than broiler chicken production. The major reason for the lower impacts is the fact that the feed conversion into animal protein is more efficient, as the production of the feed is a major hotspot in both systems.

“This research is very timely, as there are many different stakeholders interested in farmed insects. Many people have seen insects as a means of lowering the environmental burden of animal production. Insects, in many cases, can be comparable to meat and fish in terms of nutritional value. The fact that we have shown here that they can be produced more environmentally sustainably than meat means that they represent a massive potential for lowering the impact of the food production” explains lead author, PhD student Afton Halloran of the University of Copenhagen’s Department of Nutrition, Exercise and Sports.

The study also demonstrated the need for further research to look into alternative ways of feeding the crickets:

“While crickets consume plant matter in the wild, farmers started to use commercial chicken feeds because they saw that the crickets grew faster. Unfortunately, the production of feed ingredients like maize and soy can have detrimental effects on the environment. Luckily our colleagues at the Department of Entomology, Khon Kaen University are looking into other feed sources farmed crickets, such as different kinds of plants and waste products” concludes PhD student Afton Halloran. 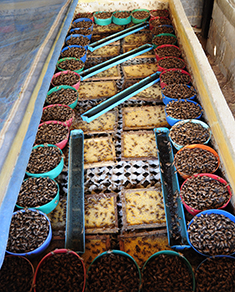 In Thailand, cricket farming has been occurring for nearly 20 years with 20,000 farms scattered throughout the northeastern and northern parts of the country. Around the world, there are over 2,000 insect species that are regularly eaten. Most of these species are harvested from the wild, but around nine insect species are currently farmed for food and feed.

The study is published as the article Life cycle assessment of cricket farming in north-eastern Thailand in the Journal of Cleaner Production. The study is a part of GREEiNSECT, a research project investigating the contribution of insects for food and feed to green economy. GREEiNSECT is led by Dr. Nanna Roos of the University of Copenhagen and funded by Danida, Ministry of Foreign Affairs.